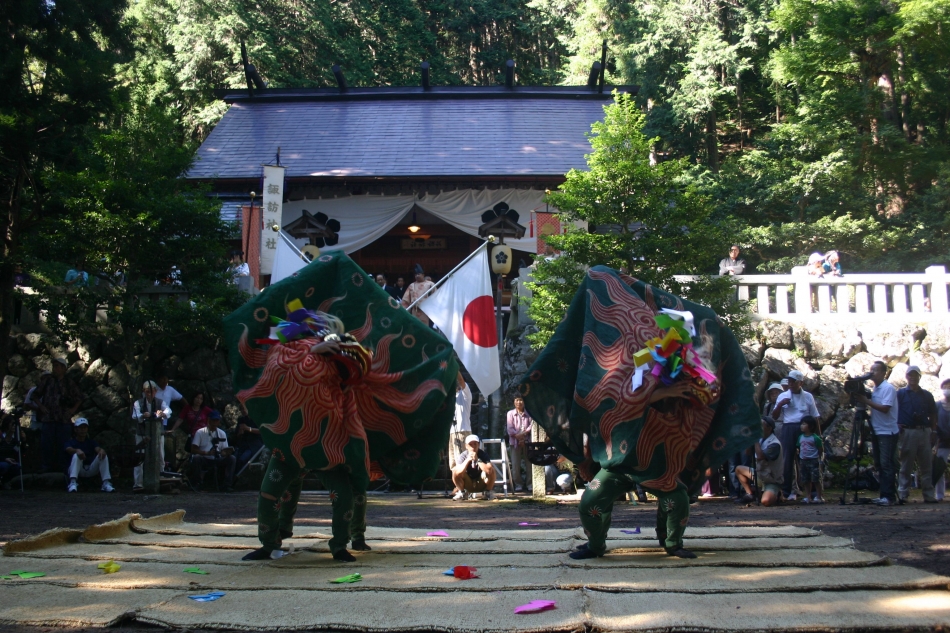 Most people associate the lion dance with Chinese tradition, but Japan has adopted its own form of the lion dance (“shishi-mai” in Japanese) as part of its tradition to honor the gods. Here in Japan, the lion dance differs from region to region. The “Kinzoujishi” dance in Takayama is no exception. The “Kinzoujishi” is a 400 year old lion dance passed down from generation to generation in the Kokufu area of Takayama. The dance is performed annually in May or in mid-September (depending on which shrine and festival it is), and has become one of the favorites out of the many festivals in Takayama for locals.

The story being expressed in the “Kinzoujishi” goes something like this:

A long time ago, a wild lion (“shishi” in Japanese) appeared in the community and started to damage the farm lands, causing much trouble for the farmers. There, a youth named “Kinzou” appeared and headed to extinguish the lion. A young woman named “Okame”, who loved Kinzou, wanted to help and offered to go with him to fight the lion, but Kinzou refused the offer as he did not want her hurt. In the end, with the help of Okame, Kinzou manages to defeat the lion. As a result, the farmlands have been saved from further damage and the community flourished thanks to the two youths. The community then deified the two youths, and since then, they have been considered god and goddess representing abundance and happy family.

The dance is approximately 20 minutes long which is considered long for a lion dance. The acrobatic dance along with the live Japanese taiko drums and bamboo flutes make for an exciting scene and dramatic experience, and the 20 minutes seem to pass by quickly. In the dance, Kinzo and the lion battle, and as the lion weakens, Kinzo jumps onto its back. The lion however regains its strength and flings Kinzo off its back and takes revenge. In the meanwhile, Okame plays a bamboo whisk to distract the lion, and when Kinzo is thrown off the lion’s back, Okame runs to his care. When the lion finally starts to weaken again, Kinzo recovers and defeats the lion.

The “Kinzoujishi” is performed by the community youth and continues to be passed down through the generations. Local festivals are common in Japan, and the youth that moved to the city for work often return to participate and reconnect with their homeland. All of the community participate in these festivals where men do the physical work while the women prepare food for the festivities. Children often participate in the children’s version of the festival consisting of traditional dance. This is not only entertainment and festivities for the locals, but functions as a way to tie together the community and pass down the knowledge and wisdom from the elders to the youth.